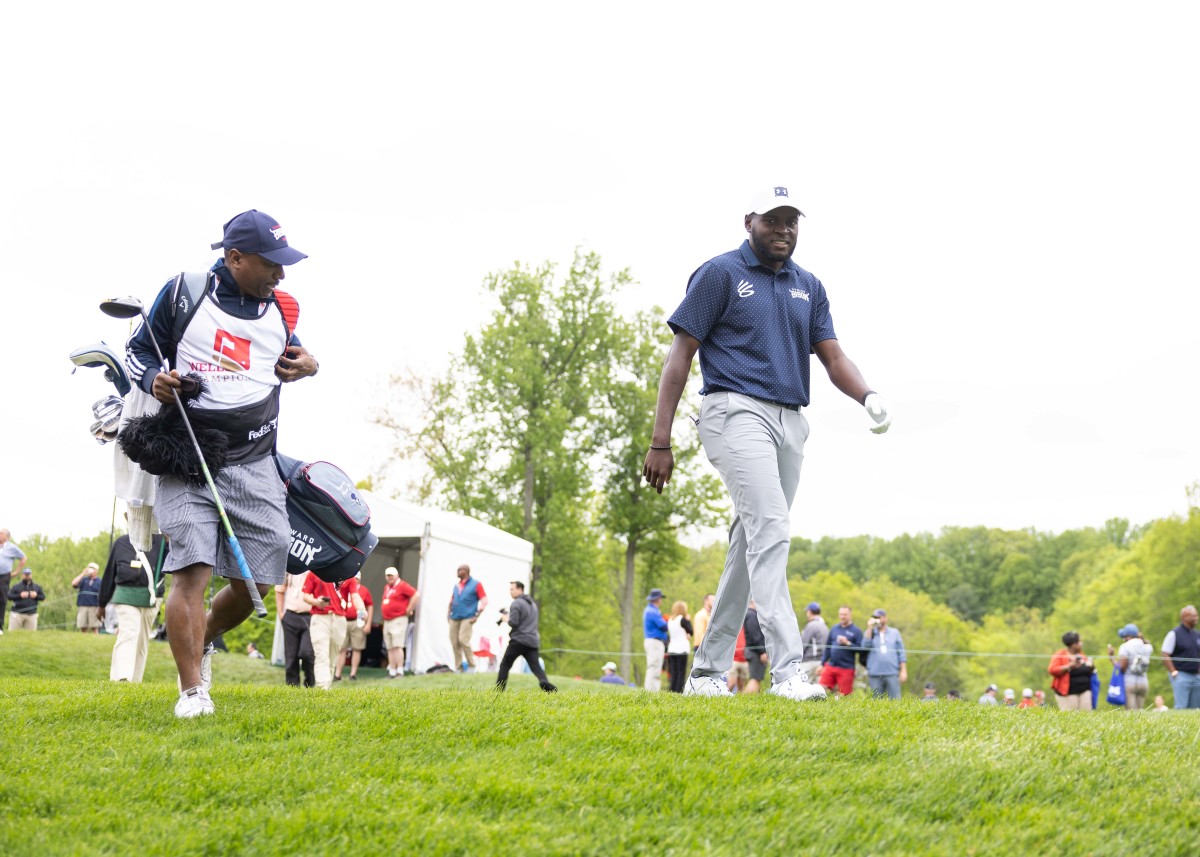 HBCU golfers and area minority children competed in a four-day Wells Fargo Championship event at TPC Potomac May 2-8. The financial institution sponsored the program to expose HBCU students and golfers to a PGA Tour event through learning and mentorship opportunities.

First, the First Tee Clinic on May 3 at Langston Golf Course in Washington, DC, gave local kids the chance to learn the game of golf from PGA Tour players.

Next, an HBCU student essay contest would allow four winners to play in a pro-am round with the PGA Tour Professional of their choice. The program is overseen by Shanan Hill, Wells Fargo’s senior director of regional banking, and Gigi Dixon, Wells Fargo’s external relations manager, who helped select participants. Each composed an essay about their “future, entrepreneurship, golf aspirations and life”.

As part of the diversity, equity and inclusion component of the tournament, two HBCU golfers, Gregory Odom Jr. (Howard University) and Marcus Byrd (Tennessee State University), played in the PGA TOUR through a sponsor exemption.

Byrd won his first tournament title at TPC Louisiana in June 2021 after his sixth start on the AGPA Tour. The Tiger finished the 36-hole course with a total of 11 under 133. Marcus learned golf with his father at Langston Golf Course and was a member of First Tee DC Wells Fargo. The young golfer will donate to the program via an NLT.

Odom Jr. appreciates the contribution of Steph Curry and the recruitment and mentorship of Howard’s golf coach, Sam Puryear.

“When you have the support of Stephen Curry, you create this team with the caliber of PWI golf teams. Without his support, I don’t believe any of this would happen. Combine the experience and mentorship of Sam Puryear , who coached at Stanford and Michigan State, and you have an elite HBCU golf team,” Odom Jr.

Odom Jr. and Howard won the Collegiate Works Championship early last week in Philadelphia before heading to Maryland for the Wells Fargo PGA TOUR Championship. Odom Jr.’s mother and family were present for his first tour.

Coach Puryear remarked: “I realize for HBCU programs that even though companies see wonderfully talented young people who can serve their institutions well through the game of golf, we want to be that leader and strive to do the right thing.”

THE FUTURE OF HBCU GOLF

HBCU golf programs have received increased financial support and success in the 2021-22 season. The SWAC, MEAC, CIAA and SIAC held their respective conference championships over the past month. The hope is to enhance exposure and resources for more young minorities and HBCU student-athletes to showcase their golfing talent on the APGA, PGA and WPGA tours.

Wells Fargo Championship and Commitment to Diversity, Inclusion and Equity

Wells Fargo is proud to host the Wells Fargo Championship at TPC Potomac @ Avenal Farm, an event we have sponsored since 2003, generating significant local impact and delighting golf fans nationwide.

Wells Fargo wants everyone to play their best – from the pros and their teams and everyone here at the Championship. At Wells Fargo, we do the little things every day for our customers, employees and the communities we serve to help them perform at their best.

Wells Fargo is dedicated to helping small businesses thrive – from local championship suppliers to the greater DC community and nationwide.

Since the pandemic, Wells Fargo has helped thousands of small businesses get the resources they need to thrive. We have donated approximately $420 million in recovery efforts through our Open for Business Fund, which awards grants to nonprofits serving the hardest-hit small businesses, such as small businesses racially and ethnically diverse.

We are proud to host a Championship Small Business Marketplace featuring businesses from golf-adjacent industries, from coffee to sunscreen to flowers, just in time for Mother’s Day.

During championship week, we will be donating a vehicle to a veteran who is also a small business owner in coordination with AutoNation and Military Warriors Support Foundation.

Wells Fargo is deeply committed to fostering diversity, equity and inclusion – at the Championship, this shines through, especially with unique opportunities to support HBCU students and alumni.

Through our relationship with youth golf organization The First Tee, the Future Entrepreneurs program selected four HBCU students and alumni to have the first draft pick at the Pro-Am, creating the opportunity to play golf with the PGA TOUR player of their choice.

Langston Golf Course is named after John Mercer Langston, an African American who served as the first Dean of Howard University Law School, the first President of Virginia State University, and the first elected African American. in the United States Congress from Virginia. PGA TOUR player Chesson Hadley will lead the clinic.

With our sponsor’s exemption, we are proud to create opportunities for Howard student Gregory Odom, Jr., who made his PGA TOUR debut at the Championship.

Over the past ten years, Wells Fargo has provided more than $30 million in financial support to HBCUs in local markets and through the United Negro College Fund and Thurgood Marshall College Fund. Additionally, the company has provided direct sponsorships and commitments to individual HBCU academic and athletic programs.