As the global SARS-CoV2 pandemic now enters its third year, science has remained at the forefront of public awareness and importance.

But despite the omicron variant forcing a move to a virtual environment, Arizona State University researchers were again in the spotlight at the world’s largest scientific gathering: the annual conference of the American Association for the Advancement of science (AAAS).

Below are some ASU highlights from presenters at this year’s AAAS Annual Meeting, themed: “Empowering with Evidence.”

A care conundrum at the intersection of class, access and health

How do networks of care – parents and extended family – change and affect children under pressure in today’s society?

Robin Nelsonassociate professor in ASU’s School of Human Evolution and Social Change, explored the conundrum of care and his AAAS research presentation.

“My research sits at the intersection of evolving questions about the creation and necessity of family and social networks, and the pressures faced by contemporary families as they navigate access to resources and engagement on global labor markets,” Nelson said. “I try to connect the issues of evolutionary anthropology and public health to ensure that those of us interested in the complexity of the human condition pay attention to the changing pressures that humans face up to our days.”

Nelson, a biocultural anthropologist, has studied the lives of families and children in Jamaica since 2004. His current projects include research on black migrants from Africa and the Caribbean who settle in Canada and how they create networks of care for their children. She also studies the lives of children who have been removed from their primary homes and placed in care facilities in Jamaica.

A science game called March Mammal Madness has captivated students and the public since its launch nearly a decade ago. The game, which involves simulated animal battles played on social media, has now reached half a million middle and high school students in the United States. Through this game, students learned basic scientific principles.

Katie Hindeassociate professor in the School of Human Evolution and Social Change at ASU, is the creator of March Mammal Madness (MMM). Hinde explored successful public engagement in science with MMM in his AAAS discussion.

The anthropologist explained the importance of using stories and narratives to engage adults and children in science, and how these techniques have been used for thousands of years.

“Stories bring together aspects of the natural world and abstract ideas and enable the scaffolding of new knowledge on the learner’s existing knowledge. A story is co-constructed back and forth between the listener’s imagination and the storyteller’s narrative in a dynamic way, and different contingencies or events unfold,” Hinde said.

MMM started in 2013 when Hinde made a support in one of his labs and then posted it on his blog. She wanted a science-based animal tournament. After all, the NCAA Basketball Knockout Tournament invites more than five dozen teams. MMM has grown exponentially, with a team of over 30 people, including scientists, science illustrators, artists and librarians.

Until March 14, you can get your support, choose your winners, then follow the competition on Twitter, Facebook and the ASU library results pages. To learn how to play, find links to curated resources to help you choose your winners, and review highlights from previous years of the tournament, bookmark the library guide at https://libguides.asu.edu/marchmammalmadness. 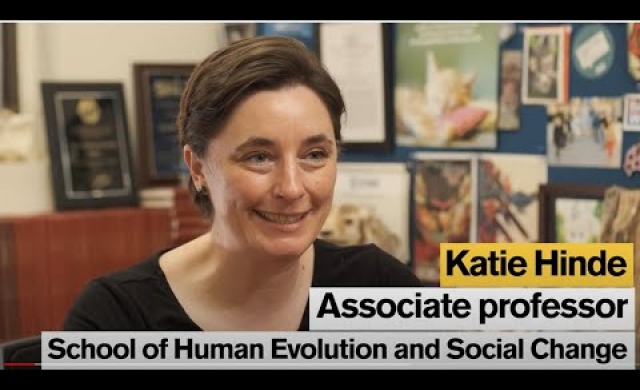 Build public interest in technology by engaging with and empowering communities

When it comes to designing and developing socio-technical systems, the public interest is not always a priority. A human-centered approach that includes public input is needed to develop lasting solutions.

“You don’t build for the public, you build with them,” said ASU professor Katina Michael. School for the Future of Innovation in Society in the Global Futures College and the School of Computing and Augmented Intelligence in the Ira A. Fulton Schools of Engineering. “You need to recognize all stakeholders in the process, as you design and deliver solutions together within an existing ecosystem.”

Michael is an expert in public interest technology and researches how to use it as a design philosophy.

Stories, technology and the fight against disinformation

Computers and the world of digital media have greatly accelerated the rate of information exchange and expanded the amount of sharing, but fundamentally misinformation is a human problem. With all this content, how can we be sure what is real or not? How can we be sure that what we read is true?

ASU Global Securities Initiative Director Nadya Bliss organized and moderated the “Narratives, Tech and Countering Disinformation” session, while Scott Ruston of the ASU Center on Narrative, Disinformation, and Strategic Influence presented on “Going beyond bots: analyzing and mitigating the impact of misinformation.“

“In the 21st century security environment, information warfare campaigns use propaganda and disinformation to attack the political will of citizens, manipulate public opinion, and erode sociopolitical institutions, all of which contribute to the fabric of democracy,” Ruston said. “These propaganda and disinformation efforts are eroding this fabric. The combination of technological advancements coupled with societal changes in the evolution of the media industry also gives groups, organizations and nation states direct access to communities, constituencies and to all national populations.

The session explored the roles that stories and narrative framing play in spreading and countering misinformation. Basically, the group discussed how technical solutions need to be combined with social interventions to effectively solve the problem.

The session brought together experts and thought leaders from IT, social science, industry and government to discuss why some groups have proven so resistant to factual arguments and continue to adhere to possibly false beliefs. Participants also learned how they can contribute to this challenge by discerning true from false information, and how to change the tide of resistance to communicating accurate information.

Science communication techniques in a time of declining trust

Professors from ASU’s School of Public Affairs and the Walter Cronkite School of Journalism and Mass Communication teamed up to present the workshop “Science Communication Techniques in an Age of Declining Trust” during the AAAS meeting. The workshop provided participants with practical techniques for effectively communicating scientific results to the general public.

Professor Eric Welch of the ASU School of Public Affairs is the director of SciOPSor Lesley Michalegko is the project manager. SciOPS describes itself as “a new kind of science communication platform that provides aggregated, unfiltered, diverse, and timely scientific expert opinion on important and timely science and technology issues to promote deeper understanding and connections. with science in society”.

“The SciOPS and News Co/Lab survey asked scientists what had happened to public trust since the pandemic began, and if and why it had declined after being about the same for about two decades,” Michalegko said. “We found that more than 75% of respondents agreed on several reasons for declining public trust in science, including insufficient science education for the public, active misinformation campaigns and conflicting scientific findings. . A majority also believe that researchers do not communicate effectively, which lowers trust. »

Welch and Michalegko teamed up with Kristy Roschke, General Manager of the Cronkite School’s News Co/Lab, to create the workshop.

Finally, in addition to research presentations, AAAS elected seven outstanding ASU faculty to the new class of AAAS Fellows, among the highest honors within the scientific community. The AAAS recognized the following ASU faculty members:

New scholars will receive an official certificate and a gold and blue rosette lapel pin to commemorate their election (representing science and engineering respectively) and will be celebrated later this year at an in-person gathering when possible in a context. public health and safety. perspective. The new class was also featured in the AAAS News and Notes section of Science in January 2022.

Top photo: A science game, called March Mammal Madness, has captivated students and the public since its launch nearly a decade ago. Katie Hinde, associate professor in the School of Human Evolution and Social Change at Arizona State University, is the creator of March Mammal Madness.