How both doctors can make the most of it 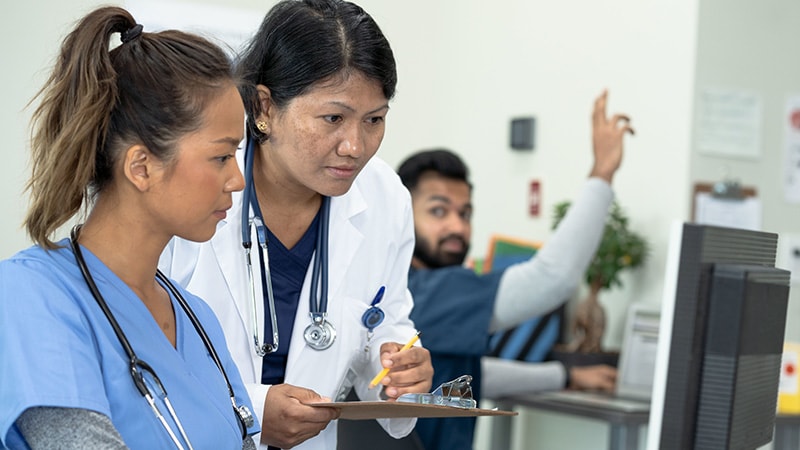 “They give me their dreams, and I give them my experience, and I profit from the exchange.” Annie Sadosty, MD, cites this 1931 quote from William J. Mayo, co-founder of the Mayo Clinic, as capturing the essence of mentorship in medicine. Sadosty, an emergency physician and dean of the Mayo Clinic School of Graduate Medical Education, Rochester, Minnesota, has been on the Mayo Clinic faculty for 23 years, working with hundreds of medical students, residents, and junior doctors.

Suffice to say, she understands the value of mentorship in medical education.

But here’s the rub: mentoring today isn’t just about taking a younger intern “under your wing” and “showing them the ropes” (among other clichés). A good mentor-mentee relationship enriches both parties and extends beyond work done in hospitals and medical schools. In fact, the potential for benefit is probably greater than most doctors realize.

“The mentor invests a lot of themselves in the mentee,” Sadosty says, “but the rewards, the dividends that accrue to the mentor are so many that it’s worth it.” Like others in the field of medical education, Sadosty sees the mentor-mentee relationship as one of mutual growth. Rather than simply imparting knowledge and dispensing advice, it is the mentor who also learns from the mentee.

The long history of long-term benefits

Mentoring is part of the history of medicine, and many physicians credit their successful careers to the mentors who guided them through the process. It is an established tradition for young physicians to hone their clinical skills, knowledge, ethics, and professionalism through observation and discussion with a more experienced counselor.

Recently, a growing number of publications have documented the benefits of effective physician mentorship, including faster promotion, better faculty retention, greater job satisfaction, and increased research productivity. A 2018 survey of more than 500 faculty members at the Massachusetts General Hospital Department of Medicine found that those who had effective mentors were three and a half times less likely to be stuck in their careers and four times more likely to report high job satisfaction. The study also observed that those who had mentors were three times more likely to become mentors themselves.

While many residency programs have created a formal mentorship process where young physicians are matched with a faculty member, mentorships often evolve organically and can take many forms. In addition to scheduled meetings, Sadosty says she takes mentoring “one cup of coffee at a time,” frequently meeting mentees where they want to be — walking, jogging, eating a meal, virtually or occasionally on social media. . She says her mentees have taught her aspects of medicine professionally, but also personally about different cultures, inspiring her with their strength and dedication.

“For an effective mentor, mentee relationships should be two-way,” agrees Jeffrey Schneider, MD, an emergency physician and chair of Boston Medical Center’s Graduate Medical Education Committee, overseeing more than 60 training programs. “It’s not just them teaching me their point of view, looking at an issue from a slightly different angle. But also, how can I develop my own skills to better connect with my mentee, pass on a skill, or develop a skill or insight? How can I make the bulb light up for them too? »

What makes a good mentor?

Since no one thinks they are bad drivers, some physicians may overestimate their mentoring skills, much like young physicians looking for a transactional relationship. What does it take to rise above?

Several studies have identified typical characteristics of effective mentors, including a 2013 survey by the University of Toronto Department of Medicine, Toronto, Ontario, Canada, and the University of California, San Francisco, School of Medicine. Among other qualities, the survey noted that good mentors put their mentees’ best interests first, were honest, approachable and committed, and most importantly, were active listeners, interested in discovering their mentees’ goals and objectives – and here’s the key – without a personal agenda.

Schneider believes that effective mentors should be inquisitive, inquisitive, and willing to accept feedback from their mentees as much as they expect their own feedback to be incorporated. “Ask lots of questions,” he advises, adding that the ability to ask questions in a safe, non-threatening way is “the foundation upon which good mentoring relationships are built.”

“I think a really good mentor listens a lot more than they talk, and on a very basic level they’re just very nice and engaged,” says Arielle Kurzweil, MD, neurologist and neurology residency program director at NYU Langone Health. Kurzweil recommends that mentors take the time to learn about the strengths and passions of mentees, as well as their weaknesses and the things that worry them the most. “I think sometimes mentees flounder a bit because they don’t feel like their mentor is interested. You would hope that a good mentor would reach out, engage, and really want to nurture their relationship. Yet a mentee must also feel comfortable reaching out and engaging; the relationship is bilateral.

Kurzweil also suggests that young doctors look to multiple mentors, rather than just one, to learn about clinical practice, research, leadership, how to balance work with their personal life and other aspects. of the lives of doctors. She advises mentees to “take different beads” and “types of modeling” from a range of mentors to shape their practice and behavior.

Kurzweil says his first doctor mentor was his father, an internist, who taught him the importance of a social history for each patient as well as a medical history. As a child, she pored over her father’s handwritten medical records, absorbing how he bonded personally with his patients.

Schneider says his early mentors took on different roles throughout his training, as an instructor, coach or cheerleader, as well as connecting with other colleagues with similar interests.

Diversity in mentoring has also been recognized as a way to increase much-needed representation within the medical workforce and improve health equity. A 2021 review of the mentorship literature from the University of Pittsburgh School of Medicine, Pittsburgh, Pennsylvania, cited studies indicating that physicians from underrepresented groups were less likely to have mentors at both as trainees and teachers.

The review compiled several themes that facilitate mentorship for underrepresented groups, including institutional support for a diversity mission, financial resources for pay equity for minority faculty, and assistance in sponsoring them for positions. of management.

Nguyet-Cam V. Lam, MD, a family physician and program director for the family medicine residency at St. Luke’s University Health Network in Bethlehem, Pennsylvania, says diversity is an important priority in her work as an educator. “I definitely want to research it, promote it and encourage it,” she says.

In addition to being a role model for students and young physicians from diverse ethnic and cultural backgrounds, she focuses on creating a diverse group of residents in her program. As a female doctor and mother of three, she feels she also demonstrates the balance between her work and family commitments, helping residents overcome any doubts they may have about their path to success.

“Being a mentor is about helping the mentee realize their full potential,” Lam explains. “And so, if one of my students or residents hesitates, ‘Can I do this? Can I do this?’ — it is my vocation to encourage them and give them all the tools to do so. Everyone has a story to tell and something to learn.

The Intangible (Yet So Powerful) Rewards

Nothing brings more joy and pride, say mentors, than seeing their mentees achieve their dreams and continue to mentor others themselves. Lam was recently thrilled when a mentee received the Resident Teacher of the Year award. Sadosty recalls a mentee who expressed an interest in global health and disaster situations. Years later, she saw him on the news setting up a tent in New York’s Central Park during the early days of COVID-19. “Witnessing other people’s dreams is hard to beat,” she says.

The industry as a whole is also reaping the benefits, adds Peter Angood, MD, CEO and President of the American Association for Physician Leadership. Since medical education lacks formal or consistent leadership training, he credits mentoring with fostering the next generation of physician leaders. In addition to providing leadership training, management training and professional development, the association runs its own mentorship program, pairing early career physicians with seasoned healthcare leaders.

“We consider part of our priority as an organization to be how best to facilitate all of these types of mentorship opportunities,” says Angood. “Once individuals start thinking about leadership, it’s usually because they have a desire to create positive change in the industry. And so, we all look to others who create that influence, create that change.

“Mentoring is a form of advocacy,” says Tanesha Beckford, MD, third-year emergency medicine resident at Boston Medical Center. “We think of advocacy as speaking out, but sometimes it’s just about guiding the people around you who may not be like you and giving them opportunities where there are certain inequalities. Beckford credits the mentors she had throughout college as the reason for her success. From helping her study for her MCATs to sponsoring her for certain positions, they have helped her overcome any obstacles that might have stood in her way as a woman of color in medicine.

Beckford now acts as a mentor for young trainees and says she still views mentoring as “a two-way street,” where the mentor learns about current issues and concerns for young physicians. She tries to celebrate each of her mentees’ small accomplishments as milestones on their journey, appreciating how they give her perspective on her own career path.

“I push them to be bigger than the mistakes I made,” she says, “to see the next generation be better, not go through the struggles you have, not hear the negative things you have. Each of us learns and grows every day.