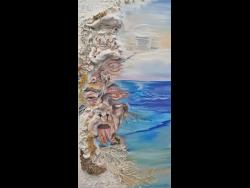 Junette Alexander’s life is guided by her desire to become a visual arts teacher. Alexander, originally from Saint Lucia, traveled to Jamaica from his hometown of Morne Dudon to study fine art, as teacher training in this field is not offered in Saint Lucia.

Alexander said that as a young girl she always found solace in art and education.

“I often joke and say that I taught from the womb,” she said in an interview with arts and education.

Francis Junior, her father, a professional chef with over 35 years of experience, carved fruit and used design principles in the presentation of his meals.

Jirnell, her older brother, had also shown promise as an artist as he would produce designs that Alexander said she was in love with.

“I fell so deeply in love with art that when he stopped drawing, I never stopped creating despite my desire to do everything he did,” she said.

With an artistically trained family, Alexander learned to express her innermost thoughts and feelings by creating her “little world” where she “felt free.”

She frequently found herself in class with her teachers at home, and she remembered her first teaching experience in elementary school, when she had the opportunity to teach the kindergarten class and then helped teaching her visual arts class at Castries Comprehensive High School in fifth form.

It was through these experiences that art and teaching became a common denominator in her life, a path she was seemingly destined to travel.

After earning an associate’s degree in commerce but unable to land a job, she began teaching children at the elementary school level in her community for free, preparing them for exams.

“I started with my neighbour’s sons and my little brother. Then came the addition of my cousins, and soon I had a small class of students who came to me for help with homework and lessons,” she said.

In 2010, at the age of 19, Alexander began teaching visual arts in Saint Lucia.

“During my journey as a teacher I decided that I needed to improve, I went to the school of teachers on the island, however, there was no possibility of being trained in the so I became a high school graduate teacher in business administration and continued to teach visual arts,” she said.

As she took her own artistic career more seriously, in 2018 Alexander began exhibiting with the Me Curator Art Gallery, and the following year her designs were featured on the cover of St Lucia’s star review on the occasion of the 40 years of independence of the country.

“It was around this time that I decided I needed to stay focused on my art and continue my education and become a certified art teacher so I could make changes on my island,” she said.

Alexander was only able to achieve this by studying abroad, and thanks to the EQUIP project and the Saint Lucia Ministry of Education, she was able to enroll in the Edna Manley College of the Visual and Performing Arts ( EMCVPA), the premium English-speaking Caribbean art school.

Now president of the EMCVPA student council, Alexander strongly believes that art reflects both the voice of an artist and that of a society. As such, her work aims to facilitate meaningful discourse on societal issues while asking relevant questions.

“I believe that art has the power to bring about changes, changes in mentality, changes in behavior, changes in a people. Sometimes all you have to do is give people a new perspective and give them time to absorb it and reflect. [because] change starts with his mindset,” the 31-year-old said.

Therefore, she believes it is crucial to provide young people with the opportunity to become creative thinkers, innovators, problem solvers and critical thinkers who will benefit their society.

Although she was unable to discuss the “why” of the lack of CAPE visual arts education in high schools and the lack of visual arts programs available at universities in Saint Lucia, she expressed his belief that the option should be offered to interested teachers and students.

Currently, colleges only offer digital art and other forms of expression to pursue, Alexander said.

“I seek to eradicate all variables [are] preventing the supply of visual arts,” she said.

She met with the administration of Sir Arthur Lewis Community College (a college in Saint Lucia), discussing the need for such programs.

“The college was very receptive and asked me to prepare a proposal for them and come back for a follow-up meeting this year,” she explained.

After earning an art degree in Jamaica, Alexander is preparing to use his skills to help students interested in art and teachers who want to become certified art teachers.

“If that doesn’t work, I will strive to get a space where I can teach visual arts to people who want to develop their artistic skills. [and] possibly offer CAPE courses,” she added.

In the future, Alexander aspires to establish an artistic residency in Saint Lucia and hopes to collaborate with the many Jamaican artists she has had the privilege of meeting.