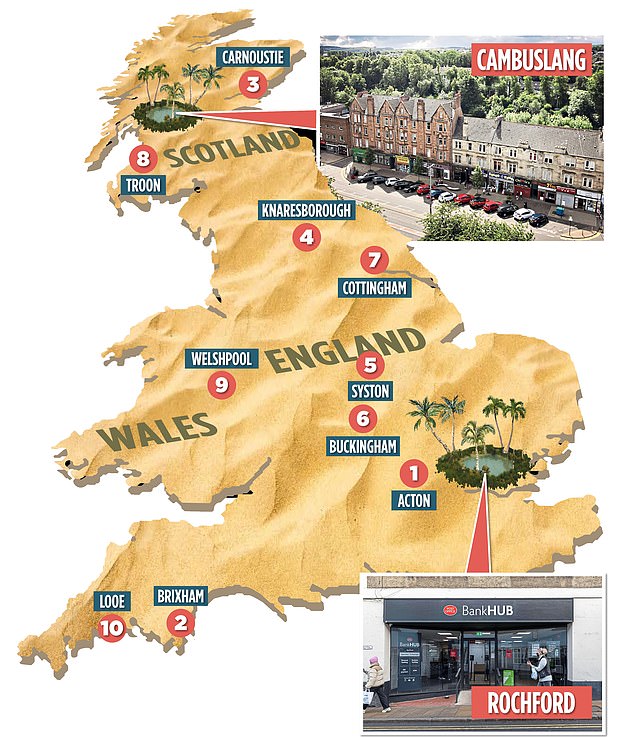 The country’s big banks have been warned by the financial regulator that they must make new-style banking hubs a “priority” in the coming months.

Such hubs, which customers of all major banks can use, have been identified as the best way to keep banking services on the high street amid a wave of branch closures. Yet, although banks have agreed to fund them, their rollout has been excruciatingly slow.

Although ten new hubs have been announced since last December, none have opened yet. This means that only two shared branches are currently in operation – in Cambuslang, near Glasgow and Rochford in Essex – and there is a risk that these will close next April when their future is considered. They were initially set up as pilots for the program.

There are plans for ten shared banking centers, but none have emerged so far. Like two oases, pilot projects are underway in Cambuslang and Rochford

Why are we still waiting? What is happening (or not happening) on ​​the ten sites

Lost its last bank (Barclays) in June 2021. Offer from Cash Action Group (CAG) for a new hub accepted on a property, located in a new shopping centre. The landlord must complete eight weeks of work before the lease can be signed.

Lost its TSB branch last year, leaving it without a bank. Only one suitable premises for a hub, but the survey identified a number of “structural and remedial challenges” and an asbestos report is required.

Without a bank since the middle of last year. CAG in negotiation with owner of a property that has just come back on the market.

Lloyds will close the last bank in town next month. CAG hopes to use the premises for a hub.

Hub intended for the Lloyds branch, which is due to close next month.

The Bank of Scotland branch will close next month. On-site offer for a hub accepted – but asbestos survey required due to age of property. Hub design complete and builders pending.

CAG is reviewing the suitability of two properties, plus the Lloyds branch which is due to close next January. Barclays branch, closed next month, deemed too small for a hub.

No properties apparently available. Assessment of the suitability of the Lloyds branch, which will close early next year.

While the organization overseeing the introduction of banking hubs says it will announce “many more hubs over the next few months”, the regulator seems unimpressed with the progress being made.

On Friday, the Financial Conduct Authority (FCA) told the Mail on Sunday: ‘Companies need to pick up the pace and provide more banking centres. We expect this to be done as a priority.

He added: “Banks and building societies must treat their customers fairly and offer alternatives to branches where necessary.

Banking hubs are part of a range of tools they can use to ensure communities have easy access to banking services and cash. Banking expert Derek French, a longtime champion of banking hubs, welcomes the regulator’s intervention, accusing banks of slowing the opening of hubs at “snail’s speed”.

La Poste, which is ready to operate these hubs, supplemented by staff from all major banks, says it has been “pushing for faster progress for months”. He adds: “The Post is ready to tap into many more banking centers and welcomes a push to speed up the selection and deployment process.”

The FCA’s intervention comes as banks and the country’s largest construction society continue to cut their branch networks and cut opening hours for those that remain.

So far this year, 433 branches have been cut or given permanent notice – with the latest batch of closures disclosed this month by Barclays and Nationwide.

Many of these closures mean that, unfortunately, cities have lost their last bank. Experts believe a similar number of branch closures will be announced before the end of the year. This will leave many people dependent on ATMs and local shops (via cash-back facilities) to get cash – and post offices to carry out basic banking transactions such as depositing cash or checks. Help with more complex financial matters – mortgage questions, savings account issues or activating a power of attorney – will only be available online.

Since the start of the year, bank closures have been monitored by ATM network operator Link under a new scheme set up by banking group UK Finance and overseen by Cash’s Natalie Ceeney ActionGroup. Ceeney is a passionate advocate for consumers with access to money.

Now, when a bank closes a branch, it must notify Link, who then assesses the impact on the local community’s access to cash. Working under strict rules set by banks, Link can recommend the installation of a free ATM if the closure limits access. In communities where closure will result in no banking, Link may also recommend setting up a hub.

It is then up to the Cash Action Group, chaired by Ceeney, to set up a hub with financing provided by the banks. But so far, those recommendations have been thin on the ground and none have been opened up.

Of the 433 branches slated for closure this year and next, Link has only called for remedial action in eight of the affected locations, five of which involve setting up a hub. These five hubs are in addition to the five hubs announced last December. John Howells, chief executive of Link, admits the rollout of new banking hubs is “far too low”. Still, he is confident discussions with banks over the rules determining when a hub can be recommended could lead to “positive news” in the coming weeks.

Last October, Derek French identified 50 cities where he believes banking hubs should be introduced urgently. Since the list was published exclusively in the MoS, only one of the towns (Knaresborough, North Yorkshire) has been named despite the fact that many have lost their last bank – or are about to do so. Howells says up to ten of the French-designated communities should be supported by banking centers. 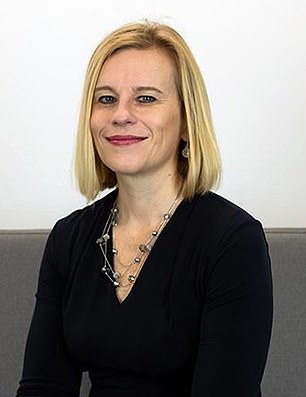 All of this is deeply frustrating. Notably because of the ten new hubs offered since last December, none are currently operational. A lack of suitable properties and the necessary building work on premises already purchased by the Cash Action Group means that more than a handful are unlikely to enter service before the end of the year. In almost all cases, there will be an unacceptable gap between the closing of the last bank in town and the start of the new banking center.

Natalie Ceeney agrees that the delays are understandable. She told the MoS on Friday: ‘Since January we have built a team comprising property surveyors, transfer agents, project managers and experts in everything from disability access requirements to the right to town planning.”

“We have established a new legal partnership with Swiss Post to manage the counters of these hubs and have agreed on the principles of layout and design. We worked with local communities to identify the right locations and in all cases engaged with the local market to secure leases on the properties.

She acknowledged that there were not enough hubs and other cash services announced, adding, “However, over the next few weeks we will be announcing many more.” We are only at the beginning of this new initiative – in a few years there will be hundreds of shared banking platforms on our high streets.’

Jenny Ross, editor of consumer group Which?, says these services will take on increased importance as banks close branches at “an alarming rate”. Yet she believes access to the money will only be guaranteed if the government keeps its promise to legislate on the issue.

Under the new Financial Services Bill currently before Parliament, the FCA will be empowered to ensure that banks maintain reasonable access to cash on the high street through initiatives such as banking centres.

Ross adds, “Once the bill passes, the FCA should be prepared to use its new powers to determine a local community’s access to cash needs and to hold banks accountable.”

Banks would not comment on the slow progress on banking hubs, referring the MoS to their trade organization UK Finance. He said: “Whenever a bank branch closes, Link independently assesses the cash access needs of the local community and commissions any new services needed, which may include a banking centre.” Ten hubs have been announced since last December, with more to come, and the industry fully supports bringing them into service as soon as possible.

THIS IS MONEY’S FIVE OF THE BEST SAVINGS OFFERS

Some links in this article may be affiliate links. If you click on it, we may earn a small commission. This helps us fund This Is Money and keep it free to use. We do not write articles to promote products. We do not allow any business relationship to affect our editorial independence.