“People think of investors as just money. But your goal is not to raise money; it’s more about building a business. 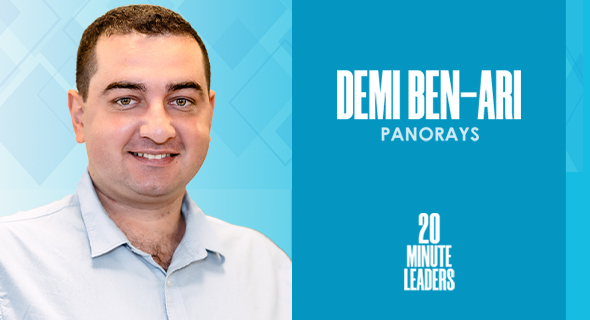 While many people start businesses with the goal of being financially successful or solving a problem they are passionate about, Demi Ben-Ari’s motivation was more about people. Panorays co-founder and CTO shares that he wanted to be able to choose the people around him and create something with them. He says that a product or idea will likely change over the course of a business, but the core of the business based on the initial team will last. Ben-Ari met his co-founders during his time in the military, and he says the relationships he established at the time were among the best perks of his service. He continues to seek out interactions with others and offer help, and he finds these connections often helpful for Panorays as well. He advises others to build investor relationships that go beyond fundraising and use their advice and experience to help you.

Demi, take me back in time a little. Who are you?

I came to Israel from a country called Georgia when I was about six and a half years old. It was the first interaction I had with different types of people. I was in the IDF’s Mamram course, the elite programming course.

I was in the Israeli Air Force, a unit called Ofek, the Software and Intelligence unit. Finally, I developed a missile defense system there. It was more on the technical side, as a team leader. After that, I asked to stay two more years in a position that would use everything I had learned to benefit other areas of the unit. I moved on to a team that provided services around open source and Java to around 250 developers, doing a lot of projects that I wanted to do but never had the chance to reach.

During the military, my intention was to work with the best people possible. It’s a difficult thing to do in the military because eventually people end up there because they have to. There are great and amazing people. But still, you have X service life, and then you go. One of my biggest passions was creating a place where you come to work and where you really enjoy doing all the things you create with great people. This is why I wanted to found a company, Panorays.

There are two main answers I hear as to why founders start a business. The first is that it can be very lucrative. The other is that you are solving a problem that you are deeply passionate about. You tell me it’s about choosing the people you want to work with.

Yes. I learn from everyone around me. From day one it started with my parents, until today with my family, all the people we hired and the entrepreneurial community in Israel, which is amazing. Once you make the smallest effort to raise awareness, I would say 95% of people would respond immediately, being helpful and really communicative. Taking the chance to learn from everyone around you is essential to creating something great. At Panorays, creating this infrastructure of people to hire more people is the key success factor.

Take me back to the foundation of Panorays.

When I left the military, I traveled with my wife to South America and North America. Then I came back and started working at a small business called Windward. I knew I was missing the business aspect of my military service, where I was really involved in building things, but we are running virtual money because it was basically someone’s budget. other. Once I got into the trading industry and tried to sell something, I saw that it was a skill that I was missing. I said, â€œI have to go to a small business to learn this. Then I can start my own business.

After a year and a half of being involved mainly in the technological aspect, I realized that if I wanted to start my own business, the best thing to learn would be to do so. A great opportunity presented itself, that of getting back to people. I knew the two people who eventually became my Israeli Air Force co-founders, for over 10 years at the time. Getting to know people was one of the best perks I got from my military service.

The first choice you have to make about people is that of partners. Eventually, the idea will change. The product will change. Your clientele will change. What will not change is the essence of the company you are forming. It starts with the founders or the people who come up with the idea.

Then the next circle of people you hire will be the core team. They will build the second circle and the third circle. When you grow up, you cannot control this all the time. The people you hire and all the business connections you make – that’s what will make your business successful or unsuccessful.

When you talk about people in your community, where is the importance? Where do you distill it?

The boring answer would be “everything”. Ultimately, the interactions you form, the time you spend with people, what you learn from them and learn about yourself is the best way to be able to understand all of the verticals you mentioned.

When you do different types of projects with people, it takes time. You need to know that working with them is fun, that they can work as a team, and that the team creates the goals you want to achieve as a business.

On the business opportunity side, the interactions we have had, all of our friends and our outer circles, create opportunities. Once you are able to take advantage of these opportunities, everything will develop. You will make mistakes, like everyone else, but you will be more successful because you try big.

Ultimately, you end up with this infrastructure of people to consult, other entrepreneurs and investors. People think of investors as money. But your goal isn’t to raise money, it’s to start a business. I look at all VCs and investors as advice, people who have seen a lot of companies. I don’t always want to raise money from them. I want to learn from their experience.

Thinking back to those five years at Panorays, what surprised you?

The amount of things we were able to achieve. But looking back, it’s not much of a surprise because of the connections to all the people we’ve had. For each fundraising cycle, all of the people we know as founders and people are kind of connected. This amounts to saying that everything has a connection. That’s why it’s really important for me to create these kinds of interactions, even for my friends and the developer communities.

How do you cultivate the motivation to form those meaningful connections?

If you do this with a motivation to do business, it won’t be so natural. I like to talk to people, I like to help people. If I could do this as a day job, I would literally do it from dawn until dusk.

When I left the military, I started a few developer communities because knowledge sharing is something I love. This is the best step you can take to get feedback, especially in Israel where people are straightforward and they are really downright honest. It’s not something I do to start a business, but it’s something I love to do.

What sparked your curiosity as a child?

Where do you get your inspiration from meeting me here at 8 am and then spending a whole day running this business?

It comes down to people. Most people who know me know that this is how I always use all the abilities of my friends. You choose the friends, the people you want to interact with on a daily basis with you to help you create new things.

If you had to choose a few words to describe yourself?

My wife said: “Social, decisive and warm”. I totally agree with her because she is much smarter than me and knows me the best.

Michael Matias, Forbes 30 Under 30, is the author of Age is Only an Int: Lessons I Learned as a Young Entrepreneur. He studied artificial intelligence at Stanford University, while working as a software engineer at Hippo Insurance and as a senior partner at J-Ventures. Matias previously served as an Officer in Unit 8200. 20MinuteLeaders is a tech entrepreneurship interview series featuring one-on-one interviews with fascinating founders, innovators and thought leaders sharing their backgrounds and experiences.