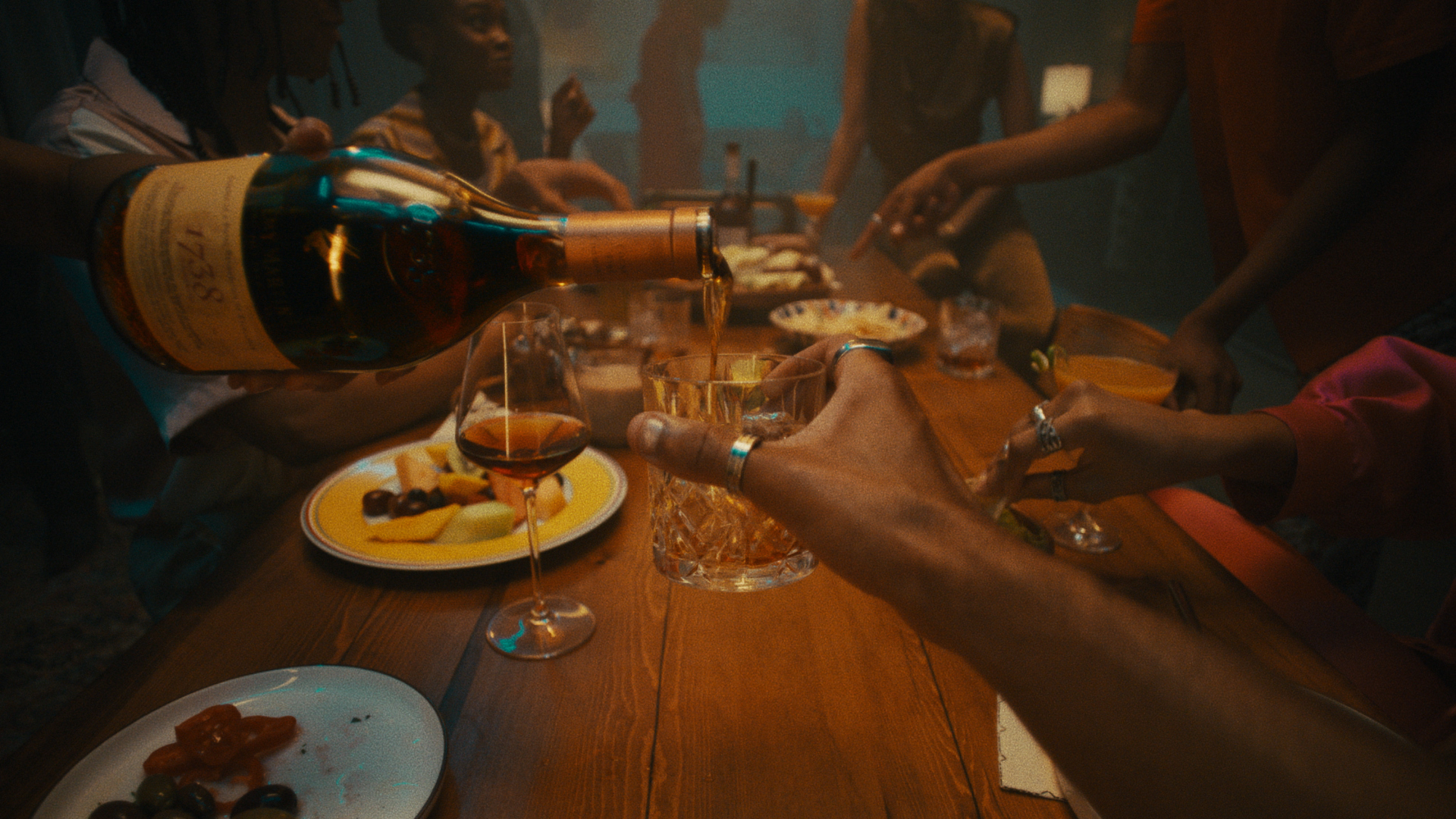 NEW YORK, NY– Rémy Martin has teamed up with chef and TV personality Alejandra Ramos, interior designer and lifestyle expert Evette Ríos, and mixologist Alex Valencia to celebrate Hispanic Heritage Month and honor Latino tradition de Sobremesa, a post-dinner tradition that embraces the appreciation of people and time. Together, Alejandra and Alex will create a range of innovative and flavorful Latin American-inspired dishes and cocktails that pay homage to Sobremesa. Evette Ríos will share her style, decoration and tips for celebrating the ritual of Sobremesa with her family and friends.

Rémy Martin remains at the forefront of memorable moments that bring people together to create deep bonds. Remy Martin has appointed global creative agency Fred & Farid to showcase the artistic culture, personality and passion points of Latino talent with a dynamic and eye-catching film. Paying homage to the richness and diversity of Latino culture, the film was crafted by an all-Latino cast of creative directors, illustrators, animators and a production team. The animation created by Colombian illustrator, animator and motion designer Jhony Trujillo drew inspiration from visual references to create patterns and animations. The film presents different artistic mediums, styles and cultures inspired by the art, illustration and crafts represented in the various Latino countries around the world.

With nearly 300 years of excellence in the production of Cognac Fine Champagne and symbolizing the diversity of craftsmanship and tradition, Rémy Martin honors cultures of excellence through the ritual of Sobremesa, inviting us all to reflect, embrace and share cultural curiosities and ideologies with our friends and loved ones. those, celebrating what we collectively bring to the table.

To capture the essence of Sobremesa, Rémy Martin will bring the partnership to life with handcrafted cocktails selected by mixologist Alex Valencia. Alex Valencia’s Remy Martin-inspired cocktails showcase the opulent and complex flavor profiles of Remy Martin 1738 Accord Royal and Remy Martin Tercet. Rémy Coquito, made with Rémy Martin 1738 Accord Royal, is sweetened with the richness of condensed milk, indulgent coconut cream and evaporated milk; topped with the warm floral notes of vanilla extract and garnished with grated cinnamon and nutmeg. Le Tercet Tropical, made with Rémy Martin Tercet is infused with vibrant and fruity notes of pineapple, vanilla apricot jam and lime juice; garnished with dehydrated pineapple, and opens a new path for cognac drinkers with its unique blend of exotic and elegant aromas.

“As a Latina, my heritage and culture inform and influence every aspect of my work. I have fond memories of time spent around the table with my family and friends. Food connects us all, and every dish I creates is personalized, made with love and tells a story,” shared TV personality and chef Alejandra Ramos. “A great meal deserves to be accompanied by a premium cocktail. Rémy Martin, whose versatile and unique flavor profiles pair well with the aromatic, savory and gourmet culinary influences of Latin American cuisine.

“Our homes are where we share and pass on traditions and family heirlooms. Teaming up with Rémy Martin to create a thoughtful, interactive and vibrant atmosphere suited to celebrating my Latino heritage is a proud moment for me. explains Evette Ríos, interior designer. “My Puerto Rican roots help shape the person I am today. I am thrilled to be part of an occasion that champions Latino art, architecture, food, music, and conversation.

“Rémy Martin is dedicated to celebrating beloved, centuries-old traditions that bring people together around the table. We are proud to team up with creative talents highly valued in their communities to cherish cultures of excellence through the ritual of Sobremesa,” said Tina Reejsinghani, Vice President, Rémy Martin Americas. “Preserving moments rooted in craftsmanship, unity and gastronomy are values ​​and principles that we defend with passion.

Rémy Martin continues to embrace the history and traditions of excellence that form a community of interdependent cultures through its “Team Up For Excellence” initiative, spotlighting respected talents across the culinary landscape. Previous collaborations include Diana Dávila, Executive Chef and Owner of Mi Tocaya Antojeria, Stephen “Chef Papi” Rodriguez, Chef and Founder of CHEF PAPI INC, Top Chef Competitor and Executive Food and Wine Producer, Chef Kwame Onwuachi and Danielle Chang of LUCKYRICE .

To bring the flavor of Sobremesa to cocktail lovers across the country, Rémy Martin will partner with Cocktail Courier to create seasonal, fresh Latin-inspired cocktails representative of the classics.

The Remy Martin Sangria kit, which evokes a sense of unity and convivial exchange around the table, will be available from September 15 to October 15 at a suggested retail price of $89.99 for the first 50 kits and 119, $99 thereafter. Rémy Coquito, a festive favorite of Puerto Rican origin, is usually made at home from a recipe passed down from generation to generation. The Rémy Coquito kit will be available from October 15 to November 15 at a suggested retail price of $84.99. Both kits will be available on the Rémy Martin website and cocktailcourier.com.

Since 1724, Maison Rémy Martin has been producing high-end spirits that constantly seduce the most demanding connoisseurs in the world. A deep love of the land, continuity of family ownership and a passionate commitment to excellence have sustained Rémy Martin for nearly three centuries. Fruit of its masterful production and generations of tradition in Cognac, Maison Rémy Martin today produces Fine Champagne Cognacs, including Rémy Martin XO, Rémy Martin Tercet, Rémy Martin 1738 Accord Royal and Rémy Martin VSOP.

Alejandra Ramos is known for her dynamic and playful culinary point of view and her passion for style both in and out of the kitchen. A New York native of Puerto Rican descent, her Latino heritage proudly informs her work, providing a fresh and authentic perspective across all platforms. Alejandra’s cheerful approach to food can be seen regularly on NBC’s TODAY Show, where she is a contributor and host of the NEW PBS series, The Great American Recipe. In addition to TODAY Show, Alejandra is a co-host of the TODAY Food All-Stars cooking show on the streaming network, Peacock, and a regular writer for TODAY’s digital site, contributing recipes and essays on a variety food and cultural topics.

Originally from Guadalajara, Mexico, Alex began his career in the service industry in 2003 and has dedicated his career to his true passion: mixology. He has worked alongside some of New York’s top mixologists. Alex has received prestigious accolades from publications such as The New York Times, New York Magazine and The New Yorker as well as television appearances such as ABC7, FOX Weather News and more; for his achievements in developing cocktail programs for numerous establishments. Alex was named one of New York’s Top Bartenders in 2015 in Time Out and has original recipes published in cocktail books. Alex is the founder of two upscale cocktail bars and a Mexican restaurant on Manhattan’s Lower East Side and Greenwich Village, La Contenta NYC.

Evette Ríos is a bilingual American lifestyle expert, writer, television host, designer, and Puerto Rican-born New Yorker. Ríos is a host of Home.Made.Nation on A&E Networks and a Today Show contributor regularly sharing holiday design, craft and gift ideas. She was previously the host of the Facebook Live series “Slice”, where she received more than a million views during its first four 15-minute episodes. She is a design expert who contributed to Daytime Emmy Award winner Rachael Ray. Her design work has been published in House Beautiful, Better Homes and Gardens, Elle Décor and Architectural Digest. She’s known for her clever how-to advice, creative craftsmanship, and dramatic room transformations. Her Puerto Rican roots, her love of travel, and her years of mentorship with some of New York’s top architects and designers have both inspired and influenced her work.