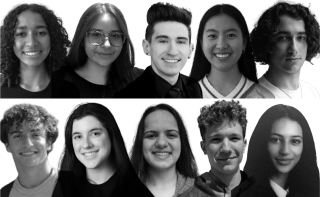 Created by Seymour Schulich, McGill graduate, BSc’61, MBA’65, DLitt’04, the Schulich Leader Scholarships are awarded to entrepreneurial-minded students who have demonstrated academic excellence and have demonstrated leadership, charisma and creativity.

From a pool of 350,000 potential candidates across Canada, 1,400 students were nominated. For the third consecutive year, 50 additional scholarships are awarded, for a total of 100. The 10 recipients who begin their studies at McGill constitute the largest cohort of Schulich Leaders that McGill has welcomed to date.

Brown, a graduate of the Southridge School in Surrey, British Columbia, he studied software engineering. In addition to his academic excellence, Brown has worked with a team of STEM student entrepreneurs from across Canada on an award-winning project to reduce water waste.

Dolgopolyy, a graduate of Collège André-Grasset in Montreal, enters the software engineering program. In addition to his brilliant academic achievement, Dolgopolyy is working on a project in association with a Montreal startup to develop an autonomous underwater robot for pipeline inspection to prevent spills.

Li, a graduate of Prince of Wales in Vancouver, will study software engineering. In addition to his outstanding academic achievement, Li co-hosted a hack-a-thon that brought together more than 150 participants – newbie and experienced coders – from nine countries.

Lyakishev, a graduate of the schools of the University of Toronto in Toronto, enters the mechanical engineering program. In addition to his academic excellence, Lyakishev competed for Team Canada at the 2019 International Junior Science Olympiad, winning a bronze medal.

Kerkelova, a graduate of Vincent Massey Collegiate in Winnipeg, will study bioengineering at McGill. In addition to her academic excellence, Kerkelova has created a robot from scratch with peers using 3D printing, coding and woodworking and hopes to one day develop robotic prostheses.

Ficaccio, a graduate of the Renert School in Calgary, will study computer science. In addition to his academic excellence, Ficaccio founded a student-run video game design studio and serves as its project manager and lead game designer.

Foster Thompson, a graduate of Dartmouth High School in Dartmouth, Nova Scotia, is entering the computer science program. In addition to his excellent academic record, Foster Thompson has held leadership positions inside and outside of the school, including his local rowing club.

Gertsvolf, a graduate of Sir Robert Borden Secondary School in Ottawa, is enrolled in a Bachelor of Science program at McGill. In addition to his excellent academic record, Gertsvolf has been an active student leader and plans to combine his passion for STEM with his aptitude for entrepreneurship in his future career.

Ibrahim, a graduate of Glenlyon Norfolk School in Victoria, British Columbia, is entering the Bachelor of Science program. In addition to her academic achievements, Ibrahim has won science fair awards, including an award from the Society of Canadian Women in Science and Technology.

Tsypin, a graduate of Marianopolis College in Westmount, QC, is entering the Honors Math program. In addition to his outstanding academic record, Tsypin has won numerous math competitions and chess championships and hopes to combine mathematical concepts with the power of AI to open up new avenues of applied scientific research.

McGill has now welcomed 40 Schulich Leaders to the University since the Schulich Foundation launched the scholarship fund in 2012.

“We are proud to celebrate over 10 years of Schulich Leader Scholarships, the premier STEM scholarship program in Canada and around the world. This group of 100 exceptional students will represent the best and brightest that Canada has to offer and will make great contributions to society, both nationally and internationally. With their college expenses covered, they can focus their time on their studies, research projects, extracurricular activities, and entrepreneurial endeavors. They train the next generation of entrepreneurial-minded technology innovators,” says Seymour Schulich, founder of the program.

Recognizing the growing importance and impact that STEM disciplines will have on the prosperity of future generations, businessman and philanthropist Seymour Schulich established this $100 million+ scholarship fund in 2012 to encourage our best and brightest students to become Schulich Leader Scholars: the next generation of innovative technology entrepreneurs.

Through the Schulich Foundation, these prestigious entrance scholarships are awarded to 100 high school graduates who enroll in an undergraduate program in science, technology, engineering or mathematics (STEM) at 20 partner universities in Canada. Each high school in Canada can nominate one Schulich Leader nominee per school year based on academic excellence in STEM, entrepreneurial leadership, and financial need.

Founded in Montreal, Quebec in 1821, McGill University is Canada’s top medical doctoral university. McGill is consistently ranked among the top universities, both nationally and internationally. It is a world-renowned institution of higher learning with research activities spanning three campuses, 11 faculties, 13 professional schools, 300 study programs and over 39,000 students, including over 10,400 graduate students. McGill attracts students from more than 150 countries around the world, with its 12,000 international students representing 30% of the student body. More than half of McGill students report having a first language other than English, with approximately 20% of our students reporting French as their first language.