The current Minnesota State Capital building is actually its third 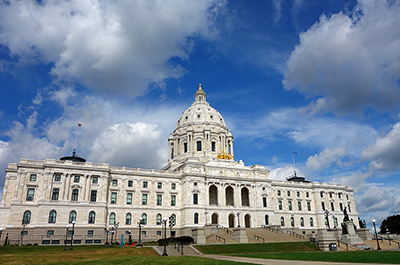 On Wabasha Hill, just north of downtown St. Paul, stands the Third State Capitol of Minnesota. This active center of state government was built between 1896 and 1905 and was designed by architect Cass Gilbert. Its magnificent architecture, decorative art, and innovative technologies set it apart from all other public buildings in the state.

The process of constructing a building larger and more fire resistant than the state’s second capital began in 1893, when lawmakers earmarked $ 2 million for the construction and establishment of the Capitol Council of Commissioners of the state to oversee the project. Due to the increasing costs of labor and materials, and sparing no expense for interior architectural details and decorative art, they increased this amount twice as much. (The total cost was almost $ 4.5 million when the building opened to the public.)

The council of seven commissioners oversaw all aspects of the work. This included overseeing expenses, acquiring the property, establishing construction specifications, selecting the architect and general contractor, deciding what type of stone to use for the exterior, and endorsement of art and artists.

The members of the board of directors chose Cass Gilbert, an architect from St. Paul, to build the new Capitol. In addition to creating the overall design, he handled all the details, selecting the types of stone used, designing furniture for the bedrooms and public spaces, and working with the artists to determine the themes and concepts represented in the designs. works of art.

The article continues after the advertisement

Erecting a building the size and stature of the Third Capital was one of Minnesota’s great achievements in public architecture and construction. Completed by hundreds of workers, the project was a blend of centuries-old construction techniques and modern construction technologies. Skilled craftsmen worked alongside steam hoists that lifted slabs of stone and iron beams into place. The stonemasons there used traditional tools but also pneumatic scissors to carve details into the stone. In addition, the building was wired for electricity and had its own power station.

As innovative as the technology was, it was eclipsed by the grandeur of the spaces. The rotunda’s 142-foot-high soaring dome, with its ninety-two-light, six-foot-wide chandelier, amazed viewers. Workers used stone from Minnesota and other parts of the United States, Europe, and Africa in every bedroom and public space, including a northern star embedded in the rotunda. The architectural elements were complemented by works of art by some of America’s best-known artists. The murals and paintings, which featured allegories and historical events, were intended to promote the virtues of good government and the history of the history, progress and prosperity of the state at the turn of the 20th century. century.

This theme continued with the iconic gold leaf quadriga located on the roof above the main entrance. Its official title, “Progress of the State”, represents the prosperity of the State. It was installed in 1906, almost a year after the Capitol opened.

The new building housed most of the state government. The state Supreme Court, both legislative branches, and all executive offices made the building their new home, along with state agencies, commissions, and the Minnesota Historical Society.

As state government expanded, space limitations were a constant problem. From the 1930s to the 1960s, some of the executive offices and various agencies moved to other buildings built on the Capitol complex. Even until the 1980s, due to space constraints, the ground floor had temporary walls and partitions installed to provide work space for office staff.

Restoration work on parts of the Capitol to their original appearance began in 1985 with the Governor’s Reception Hall. This is followed by the Senate Chamber (1988), the Chamber of the House of Representatives (1989), the Quadriga (1994), the Rathskeller (1999) and the Third Floor Ceiling (2007).

The article continues after the advertisement

After a century of use by all three branches of state government and visits by millions of people, building repair has become a focal point. Between 2013 and 2017, the Capitol underwent a full repair and restoration. Guided by three key principles – historical integrity, life safety, and modern functionality – this company received $ 310 million from the state legislature to do the work it needed. This included cleaning and replacing the deteriorating Georgia Marble on the exterior and replacing the roof.

Other work included the installation of new mechanical and electrical systems, exit stairs and an elevator. Conservators restored the fine art and repainted the decorative walls and ceilings to match the original colors and patterns of 1905. Additionally, the removal of office space on the third floor and mechanical and storage spaces on the basement has opened up new public gathering spaces, meeting rooms and exhibition areas.

For more information on this topic, see the original entry on MNopedia.

MinnPost’s detailed and independent news is accessible free of charge to everyone, without paywall or subscription. Will you help us continue this way by supporting our nonprofit newsroom with a tax-deductible donation today?